The previous blog was getting far too long so I decided to continue today's happenings here.

First on the agenda was a meeting with Jon Iversen from The Neuroscience Institute and UCSD where they will be measuring their behavior with test groups of karate (another activity of the same intensity, requiring discipline and practice), kids who do neither, and music, measuring annually for five years (they're on year 2 now). They will also be doing a study on the actual brain structure by using brain imaging! And they will be doing research on the brain stem response. FASCINATING!

Then a mtg with the asst superintendent John Nelson.  He described his district as being the catalyst to change the community, analogously to the way Eric Booth described the teacher in the Tanzanian community who goes into the community and finds out what needs to be done to meet community needs and then is held accountable to make a plan to attain that goal. He also talked about music being important because the kids need balance in their life and it gives them motivation. Side tangent: did you know some districts are trying to take fiction books out of their elementary schools??? Yea let's make kids hate reading even more than they already do with all the technology that has supplanted it completely. If we use music as a way to improve math or reading or writing, we're undermining music and the value it has in and of itself, if it's merely a way to improve other things. He wants to see SDYS represent the true demographics of the community. Apparently Chula Vista has the highest performing kids in the STATE! A lot of concepts such as "zone of proximal development" were highlighted.

I also got my hand at team teaching with Cristina with the kindergartners, another in-school program. Tupperwares with felt tops are great drums! She was an excellent teacher, we sang Twinkle Twinkle with words about fall, and then added instruments. She did a perfect example of building on one concept, praising positive behavior, and using leadership as an incentive. Rebecca Levi's idea of "sleeping instruments" worked really well too!

Finally a community concert sponsored by Ford Motor to tour ten different schools to have the YMCA afterschool program be able to listen to them. It included the William Tell Overture, Orpheus, Night Rider, Somewhere over the Rainbow, Cello Squadron (which let the cellos be soloists!), students explaining the differences between the different strings and more, but those were the highlights. Their conductor Ramon is fantastic and a professional violist from the Puerto Rican orchestra!

Yesterday in a class of 25, half the kids were new, never having played an instrument, the other half having played for a year. How did Mr. Soto reconcile this? By using the older kids to play the role of teacher and literally teach the new kids how to hold an instrument. Thank you peer teaching!

SDYS is a perfect example of not needing to be a Fellow to have a successful program, you just need the hunger to seek the answers. Lauren (the prog dir) is an amazing leader, wonderful person, and outstanding host! The staff in general is awesome and very hard-working. Great teachers that use the peer concept and have the kids play, talking minimally. They have weekly 1.5 hr staff meetings where they present problems to each other with which they are struggling and share an Opus moment of a time a kid showed them something. Dalouge is also a fantastic leader and won a Governance award of all the non-profits from a national leadership organization. 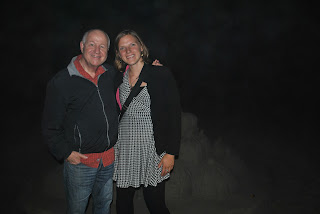 Glenn Thomas, an El Sistema global advocate, and his wife Judith generously took me out to dinner and a walk on the beach. Thanks again! He wants to construct an ES global team  to help implement programs. We need more people like him who are on the business side of things and, more importantly, not running their own nucleo! Cool sand sculpture as an aside. 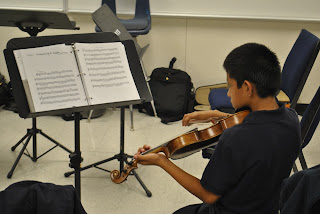 A student practicing during snack break. Broke into a Coldplay duo. 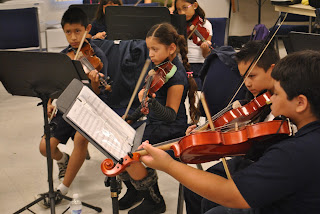 I felt proud after our strings seminar with our string fellows, that I was able to correct hand positions, bow position, and violin position :) 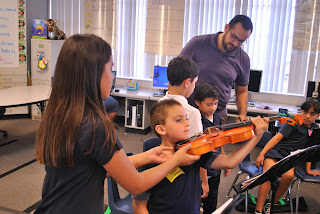 Peer teaching a new student how to play 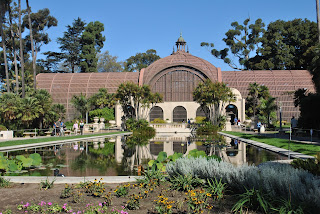 Balboa Park. Isn't it beautiful?? Many more of Balboa Park on Facebook ;p

Posted by Adventures in Arusha at 7:53 AM