Venezuela 5: A Tugging at the Heart Strings

After a wonderful two days working with the chamber choir in Carora, Thursday was a day we had all been waiting for: the White Hands Choir. However, instead of a muestra (showcase), we had the extra fortune of sitting in on a rehearsal which none of the teachers at the conservatory had done. They began with a "Gloria" and aside from being stunned with the tonal quality of the choir, I truly saw what it meant to be accessible to all, visually, aurally, cognitively, and motor skills impaired, people in wheel chairs, and not only children. And then out of my right peripheral vision, I saw a sea of white gloves doing sign language to the Gloria. If that wasn't enough, at the end of the piece, even the deaf children sang amen. As I mentioned earlier, the objective of this choir was to enable the children to speak since they can't speak since they don't hear. Music is giving them the opportunity to do so. The director then invited us to join the choir where we sang "Ave Verum Corpus" (stay tuned for video) and Carlos, Diogo, and Monique joined the White Hands part of the choir. I will admit knowing i have a strong voice I thought I would have to not sing full voice, but I was completely wrong. The strong sound that completely surrounded me was amazing and to think of the diverse composition of that sound is something I will not forget.

Then a group of five men came to the forefront of the room and introduced themselves. They sang and their intonation was impeccable. Not only were they in tune, but their syllable matching and cutoffs were perfectly together and there was a precision that I think can only come from having such sensitive ears that are heightened due to the fact that all members were blind. Watching them read the musicography on which I had had a workshop with their fingers was so touching. They then did a typical Venezuelan song and of course one of the members Gustavo is also a phenomenal cuatrista (person who plays the cuatro, a traditional four stringed instrument). As an aside, he was also the piano accompanist for another choir. I had heard Barquisimeto was the capital for musicography in the world, that there was no global comparison, but it's one thing to hear about it and actually hear it. The word amazing is overused, but these voices were truly amazing. They had all studied at the conservatory and were members of Camera Larense, the professional chamber choir that won first place for folk music at the World Choir Games in Cincinatti in June

► 4:20► 4:20
www.youtube.com/watch?v=4sXeFGPWQ3A (the first time a Latin American country had won an award!). The third song was prefaced with a beautiful speech by Gustavo about how they chose a piece that meant something to them all, a piece that was sacred and had a personal meaning to them all, Salve Regina. I decided to shut my eyes and appreciate music the way they did and a rush of emotions came over me. Beyond words, but I will try. They literally touched the deepest part of my heart and tears came to my eyes. It was that sense of deep joy, goosebumps, and any other reaction all combined into one and multiplied. This was further made profound because I had worked with the chamber choir in Carora for two hours on this piece just two days prior. It's moments like these where some can call it coincidence, but I firmly believe it's something more. Music is truly a spiritual experience and that was a moment I will never forget and even recalling it I can still feel that tangible heart string that was forever touched.

I greeted Gustavo and told him how amazing his voice was and how he made me cry and thanked him from the deepest part of my soul as I let the tears fall. His reply shocked me, "No, thank YOU for coming and listening. Without you as an audience, we'd have no reason to exist." While he does have a point of an audience being a requisite for an ensemble to have a purpose, I can't think of another time in my life when I have congratulated a performer or been congratulated and given all the credit to the person who made a compliment. We get so caught up in stardom, fame, and thanking people for coming to see you, that we forget the reason behind all of it (or at least IMHO the reason that should be there) of bringing people together through music and the community it manifests and the spiritual experience it CAN be when excellence is achieved. I used to think El Sistema always cared about firstly producing citizens and then musicians, but I realized it's not a sequential process; it's integral THROUGH the musical excellence, and that must be the foundation. 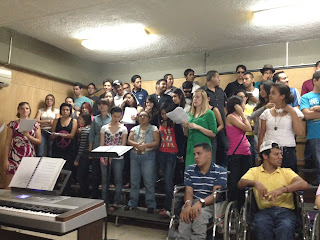 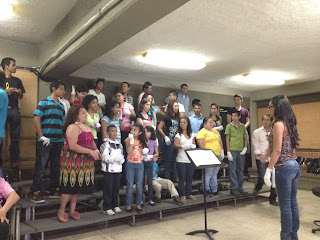 Monique, Carlos and Diogo participating with the White Hands Choir 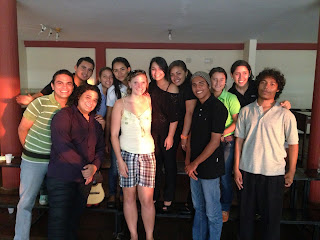 The chamber choir I worked with in Carora

Posted by Adventures in Arusha at 11:46 PM