Learning Mahler in a Day

We arrived at the Conservatory in Barquisimeto and were told people were rehearsing for auditions occurring tomorrow to go to the Salzburg Festival in July. After listening to the woodwinds for a half hour, going down the line individually singing and then playing adding note by note slowly and then in rhythm, I saw the title and composer of the piece: Symphony I by Mahler! I then found out these students had played for less than two years, were between the ages of 9-11 and, most impressively, reading the piece for the first time and treating it like any other passage or etude.

A huge advantage almost all countries have is using solfegge syllables as the actual note names.  In America, we try to use solfegge and then change to note names, which is like having to learn two different languages whereas here, they learn the solfegge and go straight to playing it because those are the note names.

I also met my first teacher who was in college and studying something outside of the music world and teaching just as a job. The choirs continue to have an amazing tone, have three parts with all ages, and are working on doing a Disney musical with all five levels of choirs, including a professional one. Something I found really interesting that demonstrates the importance of mentorship/leadership is most students are in two choirs. When they get accepted to the new level, they stay in the old level so as to keep the level of the choir as excellent and be role models.

Days like today really make me question because I feel like I have the most simplistic answer to the music phenomenon that occurs here and it feels too simple: repetition, repetition, repetition, and as soon as something is wrong, the student is stopped instantly and they start the passage over again. The few times they did run through it and a student did mess up they used the "go ahead" method, jumping back in as soon as they could and not preoccupying themselves with the wrong note. It was incredible to hear excerpts and echoes of Mahler all over the conservatory. Because of space issues, many students were practicing in the hallways and being an open space, students could hear other students practicing, which when practicing correctly, can be an incredible asset to hear the piece played correctly while you are practicing it. And because these kids are moving and pushed, they work them hard and there's no opportunity for them to be squirrely. The few times focus was lost, they were reminded of respect, or that they had an audition tomorrow, something greater than themselves and a goal to achieve.

I still want to know their secret for how students sat so obediently and quietly while they worked with one student individually, but enough secrets were undiscovered today, or so I think. 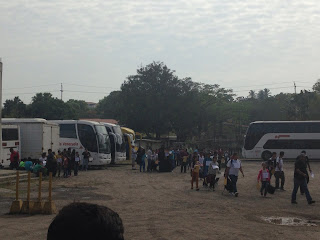 300 students auditioned for the orchestra in this region alone! 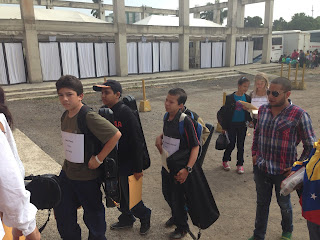 Entering the building on the big day
Posted by Adventures in Arusha at 5:44 AM