Another story is that of Jesus Segovia, a student studying composition at the conservatory. Because his story was a lot of information about the importance of folk music, I have also added my personal experiences with folk music at the nucleos.

Jesus started his musical career learning cuatro and mandolin at La Casa de Cultura (House of Culture literally translated where folk instruments were taught until very recently when the beginning of folk music is occurring in some nucleos). These Culture Houses really fascinate me and despite not being part of El Sistema per se, two of the eight nucleos we visited took place there and this is the place I've seen art and dance classes in addition to folk instrument classes where students interchange instruments. Rather than the "drill and kill" pedagogy I've seen in the classical settings here, it's more a repetition of the whole song with the idea that students will become more proficient, the more times they play the song.

I participated in a guitar class at Quilbo where they were playing some Venezuelan folk songs and the teacher played a solo instrument, mandolin, cuatro, or bandola, while the rest of the class accompanied him on guitar and continued to repeat the song until the teacher after at least five playthroughs said, "last time." I can't help but notice how repetition is still at the forefront, but how the focus is on the aural development and self-correction through repetition rather than a teacher identifying the mistake and repeating the passage for the sole purpose of correcting it. When I come back (there will be one!) I'd love to watch more folk music classes and continue to develop this idea. Again comments always welcome, especially if you have expertise in this area.

Jesus wanted to learn clarinet, but when he participated in El Sistema, instruments weren't free, only the lessons were, and clarinets were too expensive so he studied violin. He fell in love with playing violin before long and believes that the most important need in El Sistema right now are composers that "can write like not like Beethoven or Mozart, but like Echeves (a Venezuelan composer)." I learned the first time folk instruments were introduced into El Sistema was when Dudamel debuted in 2007 so it's a very new development. He has no doubt this will continue to be expanded and integrated, but his firm belief in the importance of folk music along with classical music and playing Venezuelan music was a new perspective. He gave us some of his compositions that will hopefully debut in Boston this spring! 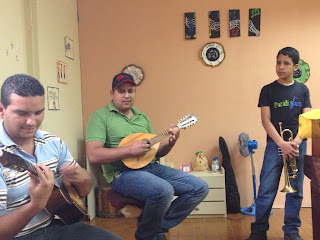 The trio at Quilbo including the 10 yr old trumpeter who hadn't played with them before. 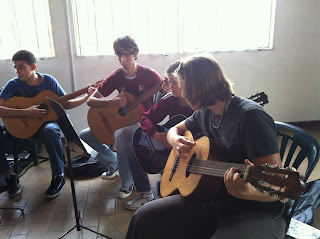