Back to Reality: A La Orden

Is it really true? I step out of the cab as my feet touch the white snow falling from the sky and I unlock my front door. As I walk into my room and see my bed for the first time in almost a month, it feels almost as if I hadn't left, but introspectively, I see everything with a new light. I don't think I've ever been so happy to eat oatmeal and a veggie burger and today, now that food is back to my control, marks day 1 for my true vegan diet. We'll see what happens.

Our last full day in Caracas consisted of a significant meeting, the one and only Maestro José Antonio Abreu. As we were anxiously waiting for him to arrive, I searched the various certificates hung on the walls for the honorary doctorate I know he had received from NEC. I had no such luck, but instead found honorary doctorates from several institutions, Germany and Venezuela, recognition from the cities of LA and Boston, and many many other awards for being a phenomenal citizen, contribution to science, humanity, music, the arts, economy..the list is endless. All of these awards (especially knowing there were others like the NEC honorary doctorate that weren't even shown!) reinforced to me what an amazing man this was, not only nationally, but literally worldwide.

I am so glad we spent the whole morning prior to the meeting planning what we were going to say because he left the meeting completely up to us. It was so special to not only have time with him, but to have a personal interaction with him. He didn't make a speech, but instead everything he said was in dialogue with what we were telling him. It was also really exciting to not only hear the takeaways of my fellow colleagues, but of their future plans, a topic which we so readily will dismiss because of fear. Even though it is still unclear, I am so calm and confident knowing it will work out as it always does.
Dr. Abreu stressed the importance of having a choral program in every nucleo and I also found out he went to MN tenish years ago for a choral conference led by their director of choral programs (who didn't even start as a choralist!). Needless to say, high dream achieved!

Despite the media angle of a corrupt, socialist, and "evil" Venezuela, I was shown the COMPLETE opposite from every person I encountered, inside and outside of El Sistema from the minute I exited the airport to the minute I arrived in Texas. They never say "you're welcome" there, but rather "to the order" and were literally there to serve us whenever, however, and in whatever way they could. It made me think our response to thank you of "you're welcome' and how automatic and unthoughtful it is when we say it. As I step back into American life, I am going to take those three simple words with me. and the next time I say 'you're welcome" I am truly going to mean it. The friendships, stories, memories, joy, laughter, and  in every way imaginable beautiful country reinspired, rejuvenated, and demonstrated to me once again how much people can have, and how much more these types of things weigh than material goods. 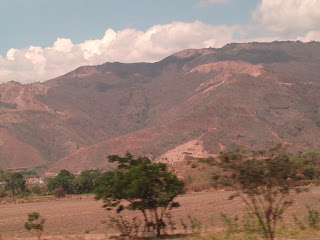 Beautiful Venezuelan countryside
Posted by Adventures in Arusha at 8:37 PM