A place I loved and called home for eight months during college has been so different this trip because for the first time I am a visitor, not a resident. I'm being spoiled staying at a five star hotel where I can swim every morning and have endless food and everyone is " a la orden" at our service, with extra and special gratitude to Rodrigo Guerrero, El SIstema's International Deputy Officer. This generosity and hospitality is so uncommon in the US, at this level anyway.  I am going to different places daily and merely observing the different nucleos and documenting them, saving interpretation and how I can connect it/what is relevant for me til later. I write this as I sit by the pool looking at the grandeur of La Avila, the city's north star. that I saw from the top via teleferico  Because of limited internet access and my notoriety for writing anything-but-concise blogs, I have decided to write a six sense poem each day and share those along with nuggets of daily takeaways on my Twitter. Some may be reposted here, but this will mostly be reflections. You should check out my fellow fellows pages if you want a narrative of what we're doing: http://rachbrakes.blogspot.com, http://roldancarlos.wordpress.com, http://eliseseymour.wordpress.com, http://andrealandin.blogspot.com

So far I think the thing that has left the largest impression on me is the scale of El Sistema with between 1200-1500 students at EACH nucleo each day, and at the new Centro de Accion Social para la Musica (Centre for Music and Social Action), 2000 students use their practice rooms, computer lab with compositional software, rehearsal and performing spaces, and soon-to-be library. Best of all, this is FREE for all students, including the performances that occur there. Last night I had the privilege to watch the Simon Bolivar Symphonic Band that not only had a full band and percussion, but also a full lower strings section. I don't think I've ever seen a performer having so much fun.She not only looked like she wanted to be there, but that she could not have enjoyed doing anything else at that moment, literally having the time of her life.

Another large impression has been the "down-to-the-doornknob" detail that is so evident in design, specifically with the CAS design of having doorknowbs that people can push with their bodies so that they can enter a room with their hands full or with a heavy instrument in hand.  Something that really struck me was the attention to aesthetics in each space, the visual design. The rooms were not only aesthetically beautiful, but supported local Latin American artsts, and even had a space to host a gallery. The chairs were not a dim maroon or black as in most concert halls, but a vibrant, neon zigzag design. The idea is that the space should match the beautiful sound that occurs in the space.

A third impression is the true accessibility El Sistema has made. Not only do they provide a vocational school for aspring luthiers, but they also provide a special school for those with limb paralysis caused by gunwounds and traffic accidents. A quote illustrating the specific need El Sistema provides was from one of these students who commutes two hours each way to attend the workshop, "I had done IT before, but that skill didn't create a community with harmony." The instructor mentioned the therapeutical aspect of having all students who had suffered from a traumatic incident and the comraderie and support created among them So beautiful! I might add that to get to this site, we had to cross the GNB (Guarderos Nacionales Bolivares) who took our passports and were there because the Cuban embassy was nearby and it was the 20th anniversary of Chavez's coup. We've been highly encouraged not to speak about politics, as the country is highly divided and the uncertainty of Chavez's status only heightens these passionate beliefs.

My favorite nucleo thus far was La Serria. The students played at a high level, was partially outside, the choir was singing three part harmony acapella after only one month of singing, and the kids were so precious asking when we were going to return. They obviously were not used to seeing gringas like myself as they asked why I had blue eyes. We signed a guestbook and our very own Rachel conducted the orchestra! I asked the choir teacher her secret and she said discipline, focus, and repetition, and the fact that she rehearses with each section separately and has a teacher initially singing with them. I've noticed this "drill and kill" approach at all the nucleos thus far and wonder if it can really be just that simple. I'm anxious to try.

Signing off from Barquisimeto after a beautiful drive through the Venezuelan mountains and countryside and a belly full of a cachapa (a sweet corn pancake) and the most delicious fresh squeezed mora juice (something between a blackberry and raspberry). 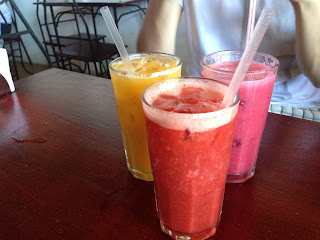 The juices are amazing (left to right): peach, berry, and strawberry 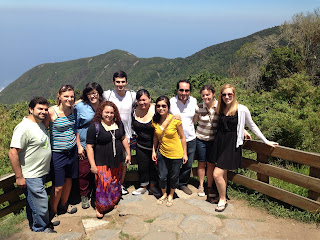 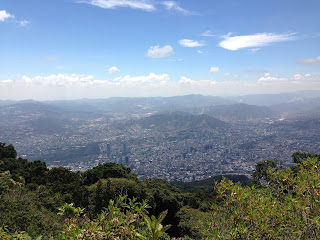 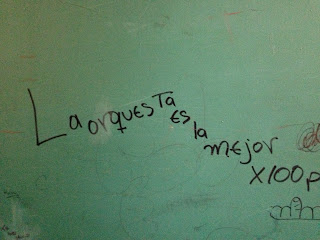 Best graffiti I've seen (the orchestra is the best x100) 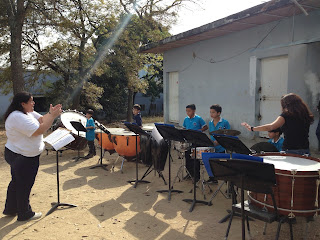 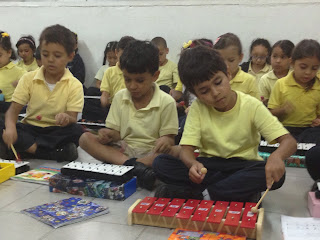 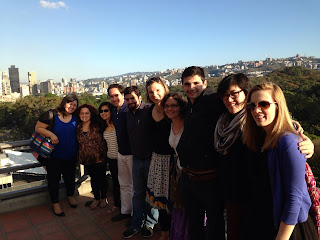 Top of Centro de Acción para la Música
Posted by Adventures in Arusha at 1:33 AM