Venezuela 3: What Is Social Change After All?


In shadow of recent national events, the country is now in a seven day mourning period with schools and related activities (including el Sistema) suspended until Monday. This is giving us a few extra days to discuss questions and debrief more fully. Some questions that came up in some great discussions yesterday and am now exploring follow. I am making no claims, only posing questions/viewpoints I've observed. I'd like to preface this after having read Geoff Baker's blog with this data is based on mostly observation in a normal classroom with a few private interviews with parents/teachers. However, the time spent at each place has been no more than one day.

I'd like to start by discussing this whole notion of social change and how we perceive it in the US vs. here. From what I can gather, it seems here by providing them with such a positive, intensive, and safe place where lots of children their own age/friends are, they are automatically creating a community and that is social change (thought courtesy of my dear friend/colleague Rachel). One mother said communities are changed because they can now talk about music, isn't that enough? As I'm sure some of you know, I tend to overthink and analyze, and I ponder, could it really be this simple? It's not in the way they are addressing the holistic child, reaching out to social services, or providing youth development as we strive for in the US. It's the fact they're in a positive, social environment, and giving children possibilities.that they couldn't access. That mother commutes by taking two buses to the nucleo we visited in Tamaca outside of Barquisimeto because she understands the importance of music after seeing her older son go through El Sistema and now sing in the professional choir and the waiting list is huge at Barquisimeto along with the fact that at Barquisimeto they're all amazing musicians and Tamaca has given her daughter a chance to read music and fully develop musical skills.

Before we arrived here we had a workshop on aesthetic education and a constant theme in the fellowship this year has been facilitative teaching, or engaging the child in new ways or ways that cater to their own learning style. However, here it seems to be all in the same way, the way that Jonathan Govias posits as the way children learn: observe, imitate, repeat. Regardless of other learning styles, this is the way they have taught over 400,000 children this year alone (about 2.5 million total) with no exception. Please again accept my generalizations as I by no means have seen every nucleo in VZ, but from the ones I have observed, this has been consistently true. My fellow fellows, esp brass, say they are exhausted at the end of the day because children are asking them how to play A-Z and rather than helping them with their own technique, they merely want to hear how it sounds played correctly. Something that to me sounds very similar to the Suzuki method. Another pillar of Suzuki is the Every Child Can concept which resonates strongly in El Sistema.

In Tamaca, I sat in on a musical literacy class (which in the States we would most likely call theory). and they had their exercises they were saying the solfegge. Note I didn't say sing. The teacher and a proficient student began by saying the exercise with them and little by little the students had to say it without the teacher. They hear the exercise whether it be theory or a passage in a piece and replicate it automatically, without necessarily grasping the understanding of what they're doing. The automaticity of it is something The Talent Code describes as imperative in developing myelin, the insulation that wraps around neurons and the reason for the 10,000 hour rule. As one does something more and more automatically, it becomes ingrained and then the understanding occurs (for instance, reading the notes rather than mimicking them). And clearly it's worked, at least in this country. I'd like to ascertain the notion that perhaps this too could work in our country and pose the question of are these other things (aesthetic education, youth development focus, etc etc) necessary? They're wonderful things, but if we're "preserving the core" are they key ingredients or are they icing on the cake?

My last stop of the day was the Parent Choir which consisted of 4 parents that day, an electric keyboard, and a trumpet studio next door (this was an open air building). We tried to learn a song and I have such a respect for their determination despite the trumpet studio next door. I ended up giving a piano/theory lesson to their director, teaching the circle of 5ths and scale fingerings. I then showed her how to read the music and play piano without having to look at your fingers each note by seeing the distance between the notes instead of the precise note. 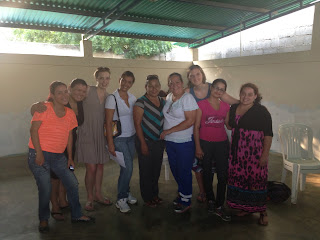 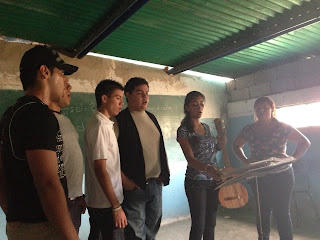 Conservatory student-led chamber choir, using the cuatro as a point of reference
Posted by Adventures in Arusha at 4:52 PM