After a seven day hiatus from El Sistema, today was a full return with conversations with Music Director Luis Jiminez, Special Education Director Jhonny Gomez, and the Baby Choir at Santa Rosa. This blog entry will be only a small snippet of the ah ha and profound moments I had today.

The day began hearing the story of how Luis, an original of the eleven kids in the garage in 1975, became the music director at Barquisimeto and my quandary of the "middle years" of El Sistema was finally answered. A big ah ha moment was the fact that El Sistema began with ALL conservatory students, so not only did all students have music exposure, but they were at a conservatory level. This made so much sense because it gave Dr. Abreu the persuasion he needed to convince the government music could save lives that wouldn't have been possible with beginning students. It also enabled for there to be mentors/proficient teachers from the start so that parallely he could begin nucleos for all students within the year. He chose to create nucleos where the eleven students were from assigning a director and coordinator for each nucleo. Of course, this idea wasn't without opposition. Especially from the conservatory where 1/50 students were selected previously and studying for ten years prior to entering the professional level and now ANY student could study music with aspirations to be at the professional level (and as we know, succeeded). Barquisimeto was a "hub" nucleo in that these musicians who were in the founding orchestra at Barquisimeto now taught at all the neighboring municipalities. Today was yet another example of the importance of questioning assumptions because today two were reestablished: 1) El Sistema didn't start out with just eleven random kids, but rather eleven conservatory musicians and 2) El SIstema didn't start with young kids, but rather students who had studied for TEN years (or more) and had the ability to teach.

Another interesting fact to note is that classical music here is referred to as "academic music." Venezuelan songs are in a difficult key (A Minor) for a beginner, but Uruguayan Hector Gutierrez who worked with the original 11 managed to simplify arrangements so that they could be used for beginners (and are still used today). They used Venezuelan folk songs in the repertoire from the beginning and used these as leverage for government support because in the beginning while they did have some government support, a lot of their support came from the private sector. It wasn't until very recently that Venezuelan traditional music has been brought to the same level with cuatro orchestras, etc. as classical music.

We then had the privilege of meeting with Jhonny Gomez who was inspired to start the White Hands Choir after hearing a concertmaster in a wheelchair play Tchaikovsky 4, none other than Itzhak Perlman. It was then that he was so moved and realized that students with disabilities had just as much right to equal conditions as those without. But beginning, he had to obtain a degree in special education, as there was no comparison globally for him to use as a resource. He now works with six types of disabilities: visual, aural, motor skills, cognitive, autism, and learning disabilities. I have yet to experience them firsthand (stay tuned after Thurs), but Jhonny said today how many famous musicians not only tear up after experiencing their sound, but forget they have disabilities until they try to talk to them. They see them as a very high level percussion band, recorder ensemble, handbell ensemble, or choir, depending on the ensemble, but the disabilities by no means affect their high level of excellence in musicianship.

The president of the Bonn Museum in Hamburg was so inspired that after having visiting them, he placed the white gloves they use for the choir next to Beethoven's original 9th Symphony score. He said, "If Beethoven were to live today, he would compose for the White Hands Choir." For those of you who don't know, Beethoven was deaf and "the spirit of Beethoven lives inside each one of these choir members." These students are so pure and work so hard (symbolism of white gloves). After the Jhonny opportunity to visit Hamburg, the director gave him a picture of Beethoven's hand mold telling him "there is no greater gift for them to have than Beethoven's hands." Tomorrow morning we are going to have the opportunity to learn how to translate printed music into Braille and today I saw a score in Finale (a music notation software) print out in Braille.

El Sistema over and over again demonstrates that there are no limits. When someone has a vision, they find the resources to realize it and slowly make the dream a reality. Jhonny emphasized today how important it is to not only have a vision, but to have an objective in mind. The objective for the whole Special Education dept is to create equal conditions. Nowhere else in the world will you find blind clarinets asking for Tsychavosky scores or vocalists singing arias, all by memorizing the Braille notation. Specially, for the White Hands choir the objective is an outlet to help them speak. "Because they don't hear, they can't speak." Music can change this and it has. Music can manifest true miracles.

I was waiting for the van outside on the steps at the entrance to a nucleo reading my book when I saw across the way a father pointing note-by-note to his son's music as he played the recorder. He approached me and attempted to say "How are you or what's your name?" (I'm still uncertain which) but his words were inarticulate so I spoke to him in Spanish. He wanted me to sing the colors song in English, so I began to sing Raffi and very quickly noted this wasn't the song to which he was referring. I then asked him to sing it and he did (stay tuned for video, internet here not worth trying to upload now). He explained to me how he had the opportunity to learn English at his school every day, but they charged by the class and his family didn't have money to have him attend classes. It was very evident how proud he was of knowing his colors and his father coaxed him along in trying to speak to me in English, but never got further than "My name is Moises." I told him (in Spanish) I'd be happy to give him a "regalito" (little gift) of teaching him any word he wanted. He immediately responded, "All of them." I explained that wouldn't be possible in a day so after thinking for a bit, he responded, "I want to learn the English word for Dudamel." This demonstrates the fame and love this man has attained even in a 6 yr old's mind, that of any word in English a musician was his choice word. I dare you to find a child in the US who could say the same. After chuckling to myself, I explained that names were the same in English and asked him again. He responded by telling me he knew another color, "anaranjado. Orange." And then, as I've seen many children do here, so precocious for their age, he politely excused himself saying he had to go to class. 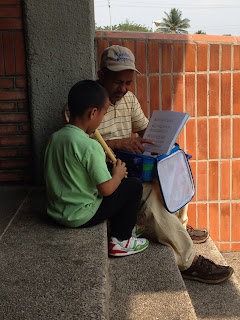 Moises practicing with his dad 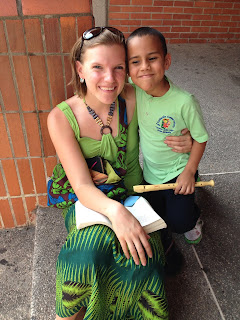 Moises, my new friend, as I was waiting for the van
Santa Rosa

My last stop of the day was at the newest nucleo in Lara that is actually a plaza where students divide into private lessons/sectionals in different corners of the square. I saw two year olds not only paying attention to things like dynamics, not elliding vowels and pitch, but also how to act at the end of a song and when an audience member applauds. I saw children crying because they wanted their parents, a child who was struggling psychologically, on medication and reacted strongly to the change of having me teaching, students who admittedly said they didn't like to sing, but reluctantly eventually participated, and students who were not focused. Of course with these fallacies, I learned more. And to watch the 6 yr olds merely repeat the words the teacher was singing and stopping them when pitches were incorrect with no need for moving bodies or relevance to the students, I can't help but think of the emphasis we put on these concepts in the US, especially with young children, and the arguent of how these types of things evade behavior issues. Really here all they do to evade behavior issues is discipline.

One of the students Isabelle at age 2 potty trained at the nucleo. She was in diapers and every day saw all the other students using the bathroom. One day she asked the teacher if she could use the bathroom to which the teacher responded, "You're in diapers." But she protested and said she wanted to, so the teacher brought her to the bathroom and that was the end of her diaper days. Yet another example of observing, mimicking, and repeating as the way children learn. This was certainly a residual effect, but it certainly illustrates the positive power of peer influence (this is different than peer pressure.) Everyone around her was using the bathroom so she felt excluded not being able to do so.

And then the Youth Orchestra at the Conservatory concluded the day with Mahler 5. Punto final. To see 12 yr olds playing Mahler with such robust sound and fervor is unforgettable. And then Alfredo, the orchestra director said another quote that will stay with me for a long time (interpreted into English), "We see ourselves as on top of the whole country. With all the bad going on in the country, we can separate ourselves and come out on top, dedicating ourselves to these children and the music."

Posted by Adventures in Arusha at 4:05 PM